Nolan’s 9. To say this was the run of my life is an understatement, albeit complicated. 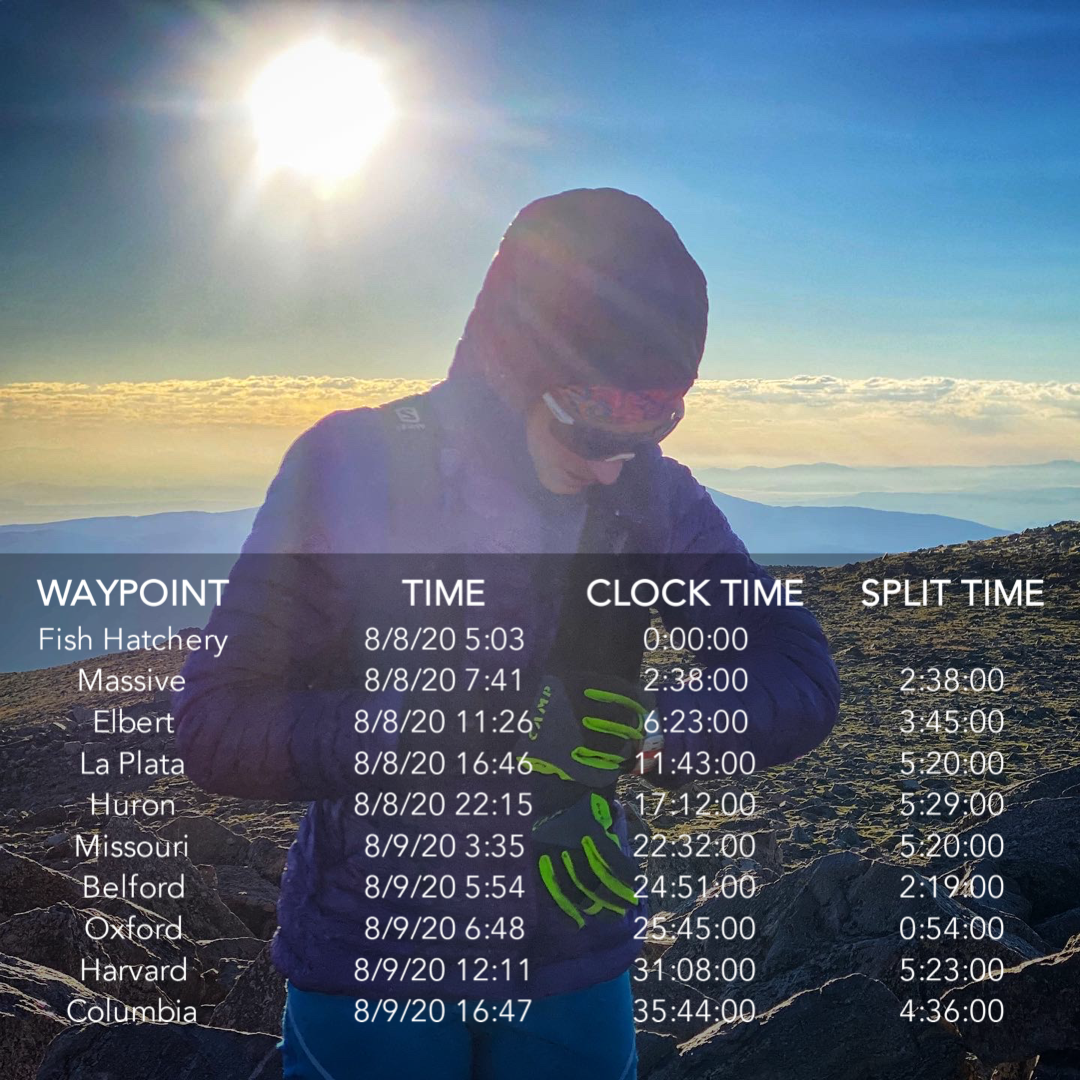 On Saturday, August 8, 2020 at 05:03am, under a black sky, I set off from the Fish Hatchery in Leadville. It didn’t take long to get in a rhythm once my feet left the trail and I ventured onto cross country terrain. Quicker than expected, I stood atop my first summit, Massive. Even more quickly, I found myself atop Elbert. The movement felt familiar, natural, and surprisingly fast.

I set off down Elbert, cutting more time off my splits. This was where I met my crew and was off with less than five minutes wasted. Up highway 82 to La Plata, I regretted slamming the excessive sodium at my crew station but watered it down with my electrolyte drink mix and pressed on.

La Plata now behind me, I ran it in to Winfield. I was nauseous still from that sodium earlier but still able to run the flats and downhills. I met my crew at Winfield and Eric biked alongside me as I approached the Huron trailhead. We bid ado there, not to see him again until after I descended Huron alone in the dark night down to Clohesy Lake.

Later than planned, Eric found my headlamp descending upon him. Before long, we tagged Missouri, Belford, and Oxford. It was here that I set off solo again.

I planned to take a micro dirt nap in Pine Creek after descending Oxford, but I was too amped by the kiss of sunlight and probably too stupid. I jetted up the steep tundra of Harvard and hit 13k, when I heard a boy singing and watched flower people dance to the song. Whoops, I was hallucinating; the song was my lungs wheezing with a slight crackle. I pressed on, albeit hindered by this song.

The summit of Harvard was slow to reach, and Columbia even further. The reality of my situation became clear, I couldn’t move my legs and every 5 steps required minutes of panting. I succumbed to altitude sickness and my lungs began to fill with more fluid. HAPE. Defeated but not stupid, I called my attempt on Nolan’s at 9. I descended down to recovery, an ER trip, and some steroids for my lungs. It was the run of my life, until it wasn’t

A special thank you to my crew. Without you, I couldn’t have selfishly run amok in the mountains.